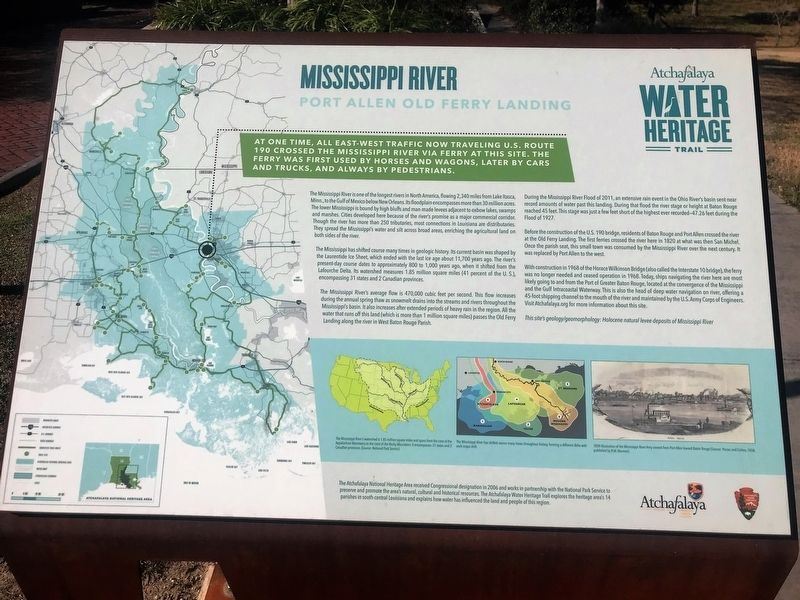 At one time, all east-west traffic now traveling U.S. Route 190 crossed the Mississippi River via ferry to this site. The ferry was first used by horses and wagons, later by cars and trucks, and always by pedestrians.

The Mississippi River is one of the longest rivers in North America, flowing 2,340 miles from Lake Itasca, Minn., to the Gulf of Mexico below New Orleans. Its floodplain encompasses more than 30 million acres. The lower Mississippi is bound by high bluffs and man-made levees adjacent to oxbow lakes, swamps and marshes. Cities developed here because of the river’s promise as a major commercial corridor. Though the river has more than 250 tributaries, most connections in Louisiana are distributaries. They spread the Mississippi’s water and silt across broad areas, enriching the agricultural land on both sides of the river.

The Mississippi has shifted course many times in geologic history. Its current basin was shaped by the Laurentide Ice Sheet, which ended with the last ice age about 11,700 years ago. The river’s present-day course dates to approximately 800 to 1,000 years ago, when it shifted from the Lafourche Delta. Its watershed measures 1.85 million square miles (41 percent of the U. S.), encompassing 31 states and 2 Canadian provinces.

The Mississippi River’s average flow is 470,000 cubic feet per second. This flow increases during the annual spring thaw as snowmelt drains into the streams and rivers throughout the Mississippi’s basin. It also increases after extended periods of heavy rain in the region. All the water that runs off this land (which is more than 1 million square miles) passes the Old Ferry Landing along the river in West Baton Rouge Parish.

During the Mississippi River Flood of 2011, an extensive rain event in the Ohio River’s basin sent near record amounts of water past this landing. During that flood the river stage or height at Baton Rouge reached 45 feet. This stage was just a few feet short of the highest ever recorded—47.26 feet during the Flood of 1927.

Before the construction of the U.S. 190 bridge, residents of Baton Rouge and Port Allen crossed the river at the Old Ferry Landing. The first ferries crossed the river here in 1820 at what was then San Michel. Once the parish seat, this small town was consumed by the Mississippi River over the next century. It was replaced by Port Allen to the west.

With construction in 1968 of the Horace Wilkinson Bridge (also called the Interstate 10 bridge), the ferry was no longer needed and ceased operation in 1968. Today, ships navigating the river here are most likely going to and from the Port of Greater Baton Rouge, located at the convergence of the Mississippi and the Gulf Intracoastal Waterway. This is also the head of deep water navigation on river, offering a 45-foot shipping channel to the mouth of the river and maintained by the U.S. Army Corps of Engineers.